World Best Seller of pieces of land by Internet 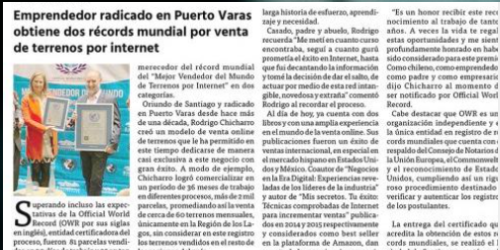 Exceeding even the expectations of the Official World Record (OWR), the certification body of the process, there were 81 pieces of land sold in 30 work days and 25 in just one day which Chilean businessman Rodrigo Chicharro Sáenz managed to accredit and that made him deserving the world record for the “World’s Best Seller of pieces of land by Internet” in two categories. 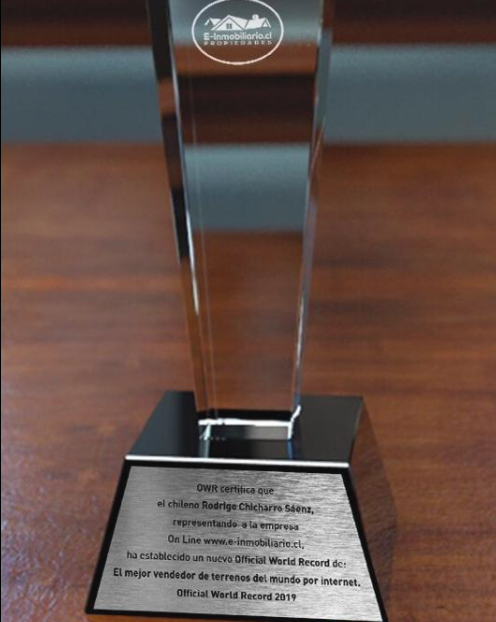 WHO IS RODRIGO CHICHARRO?

A native of Santiago and based in Puerto Varas for more than a decade, Rodrigo Chicharro, created an online land sale model that has allowed him to dedicate himself almost exclusively to this business with great success. As an example, Chicharro managed to market over a period of 36 months of work in different processes, more than 2,000 plots, thus averaging the sale of about 60 pieces of land monthly , only in the Lake District, without considering in this register the land sold in the rest of the regions of the country. This world record, which a Chilean accedes for the first time in history, is preceded by a long history of effort, learning and need. Married, father and grandfather, Rodrigo recalls “I was not an engineer, not a builder, I was not professional, I just had my creativity and the desire, I finally concentrated on the Internet and dreaming big.” “I got in as much courses I can, I followed as much gurus as I can that promised the success on the Internet, until I was decanting the information and I made the decision to make the leap, to act through this intangible, novel and strange network,” said Rodrigo, recalling the process. He already has two books and has extensive experience in the world of online sales. His publications were an international sales success, especially in the Hispanic market in the United States and Mexico. Co-author of “Negocios en la Era Digital: Experiencias reveladas de los líderes de la industria” and Author of “Mis secretos. Tu éxito: Técnicas comprobadas de Internet para incrementar ventas” published in 2014 and 2015 respectively and considered as a best seller on the Amazon platform, give an idea of the experience and knowledge that today result in obtaining the two world records. “It is an honor to receive this recognition for the work of so many years. Sometimes life gives you these opportunities and I feel deeply honored to have been considered for this award. As a Chilean, as an entrepreneur, as a father and as a businessman” said Chicharro when he was notified by Official World Record.