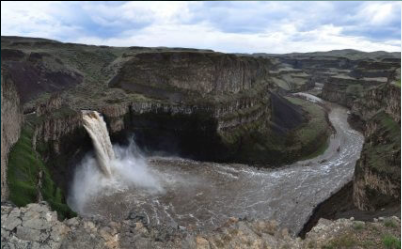 Perched on the brink of a 186ft drop, this was the moment when Tyler Bradt probably felt the urge to start frantically paddling backwards.

Less than four seconds later, he was celebrating a world record for kayak descents. The 22-year-old American touched 100mph as he plummeted over Palouse Falls in eastern Washington.

Tyler Bradt tumbles down the 186ft waterfall, shattering the previous world record of 127ft he’d set weeks earlier Amid an eerie stillness he fell 186ft in just 3.7 seconds as he touched speeds of 100mph in the terrifying descent.

After disappearing under the water at the base of the torrent, he emerged with a broken paddle.

His only physical damage was a sprained wrist. The amazing feat was captured on film and saw Brant set a new world record for kayak descents. The previous record had been set only weeks earlier by Pedro Olivia as he plunged 127ft over the Salto Bello falls in Brazil. Bradt admitted after his record breaking plunge he had risked his life with water rushing at 2,000 cubic feet over the falls. ‘There was a stillness,’ he said. 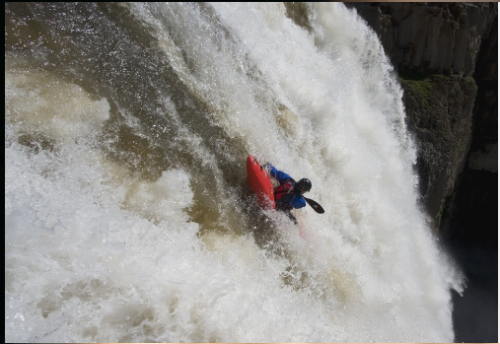 This Official World Record, broke the GUINNESS WORLD RECORD back in 2007:

The longest descent over a waterfall by canoe is 32.6 m (107 ft) by Tyler Bradt (United States) at the Alexandra Falls, Hay River, North West Territories, Canada, on 7 September 2007. Tyler achieved the descent by staying to the far left of the waterfall and landing in the safety zone (where the water pushes away from the waterfall’s base).

Fellow kayaker Rush Sturges also attempted this record but failed to stay in his kayak.

With record low temperatures and rainfall amounts this spring, it seems as if summer will never come to northern Idaho this year. With the St. Joe and Coeur d’Alene Rivers cresting above flood-levels in the past few weeks, St. Maries and other residential areas along the waterways are preparing for flooding that could continue for weeks. In light of these wet, dreary conditions in northern Idaho, it is necessary to leave the torrential downpour behind and head west this weekend to the arid, desert-like landscape of southeastern Washington.

Here, in the heart of the Channeled Scablands of the Columbia River Plateau, lies beautiful Palouse Falls State Park. Palouse Falls sits about two hours west of Moscow, ID. To get to the falls from Moscow, take the Moscow-Pullman Highway (WA-270 W) to Pullman and connect with US Highway 195 N to Colfax. Once in Colfax, follow WA-26 west for about fifty miles to the small town of Washtucna. After passing through Washtucna, follow the highway (WA-260) for a little over six miles to the turn-off to Palouse Falls State Park.

Following the many signs from this point, you will arrive at the park in around twenty minutes. While the drive from Colfax to the park is very barren and dry, the story behind the area’s creation is pretty interesting.

As the floods subsided, the water carved out the various valleys and coulees through the Washington desert.

Continuing erosion created the falls as they are today. As I said, the drive can be a little boring, but once at the destination, it definitely seems worth it.

Driving down the narrow gravel road from the highway to the park, it’s hard to expect to find much beauty in the surrounding area. Upon rounding the last bend in the road, the hills open up and Palouse Falls can be seen in its entire splendor. Towering to a height of anywhere between 180 and 198 feet (depending on water levels), the raw power of the water cascading from such height is breathtaking.

At this time of year, especially due to heavy precipitation to the east, the sheer force of Palouse Falls is enough to make anyone grateful to be on solid ground and not on the semi-placid surface of the Palouse River above the falls. Anyone, that is, except the bravest, better yet, the craziest of white-water thrill-seekers.

On April 21, 2009, Montana professional kayaker and resident lunatic, Tyler Bradt, successfully ran Palouse Falls in his little red kayak, paddling over the falls and surviving the 189 foot drop to the violently churning, white pool below. For those of us content to view the falls in a less up-close-and-personal way, there are multiple trails winding throughout the park, leading hikers to various viewpoints. One network of trails snakes away from the main viewing area and back up and around to the large basalt columns towering over the lip of the falls.

Hikers may take the trails down to the banks of the river above the falls, but the trail is steep and doesn’t really provide a great view of the canyon below. 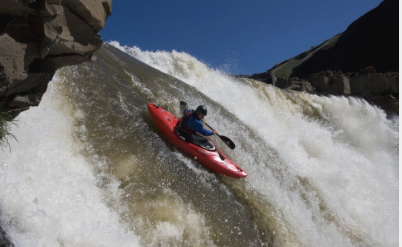 There is a trail that winds down to the base of the falls, leaving climbers with an awe-inspiring perspective of a waterfall that soars to heights higher than Niagara Falls. Be warned; the trail is steep and a prime target for rock falls and slumbering rattlesnakes. None of the trails in the park are maintained, but if you are willing to accept the risks, no park official will stop you. Those who stay in the main park area are bound to be entertained by numerous little marmots that scurry along perilously steep rock faces at the rim of the canyon.

The best time to visit Palouse Falls is now, in the spring-time. If you make it to the park early enough in the morning, you just might catch a picturesque rainbow in the spray at the base of the falls. If you’re like me, you’re more of an afternoon/evening person, a characteristic that lends itself beautifully to catching colorful sunsets above the canyon and falls. If you are ever making you way over to Seattle, I would definitely recommend a quick detour to see one of the Pacific Northwest’s wonders!