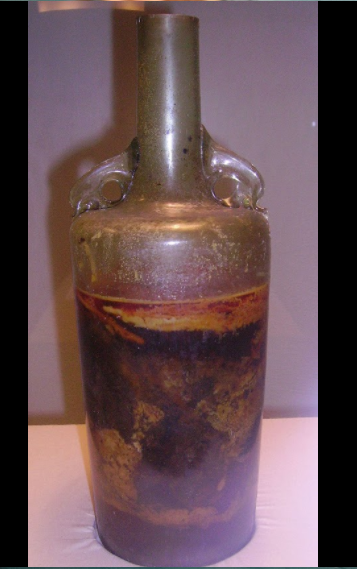 The oldest bottle of wine in the world The oldest #bottle of #wine, or at least the one on record dates back to 325, is more than 1,600 years old.

The bottle was discovered in 1867 during an excavation in the tombof a Roman nobleman that contained two sarcophagi, in the vicinity of the city of Speyer in Germany, and is now in the Historical Museum of Pfalz.

It is believed that the man was a Roman legionary and that the wine was a provision for his heavenly journey.

Of the six glass bottlesfound in the sarcophagi, only one contained liquid. It is a large container, with capacity for one and a half liters of liquid and a handle on each side.

The bottle, which is sealed with wax, has never been opened because the Kaiser’s chemists, who analyzed the bottle during the First World War, claim that the white liquid inside it could be poisonous due to the passage of the weather.

While it has reportedly lost its ethanol content, analysis is consistent with at least part of the liquid having been wine.

The wine was infused with a mixture of herbs.

The preservation of the wine is attributed to the large amount of thick olive oil, added to the bottle to seal the wine off from air,[2] along with a hot wax seal.

Petronius (c. 27–66 AD), in his work, Satyricon, writes of plaster sealed bottles, and this one is analogous. The use of glass in the bottle is unusual, however, as typically Roman glass was too fragile to be dependable over time.

While scientists have considered accessing the liquid to further analyze the content, as of 2018 the bottle remained unopened, because of concerns about how the liquid would react when exposed to air.

The museum’s curator, Ludger Tekampe, has stated he has seen no variation in the bottle in the last 25 years.